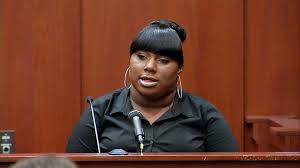 As a mom, I can’t help but take a break in a schedule of deadlines that have already passed to consider the case of Trayvon Martin and George Zimmerman. I’ve watched a clash of cultures take place in a courtroom filled with the brightest minds in public and social media across a broad spectrum of outlets. I have also watched the shared practices and social behaviors among young people on full display in an adult world, trying to, in rapid succession, collapse time and experience among cultures to record what happened that deadly night Sunday, February 26, 2012, when Trayvon Martin was killed.

There, in the courtroom, is a test of wills between a star witness for the prosecution, 19-year-old  Rachel Jeantel the last to speak with Trayvon Martin before he was killed, and a defense attorney cross examining her testimony.  I was struck by the gulf between Ms. Jeantel and the defense attorney. The intensity of each moment was broadcasted in meticulous detail across mediums with each documenting language not necessarily recorded, transcribed and interpreted on a routine basis. Most of us simply meet, greet and then move to the next acquaintance without dissecting body language as a protocol.

But, on the witness stand in a courtroom in Sanford, Florida, it is the full body language, and the meet up with the spoken word that has captured everyone’s attention. You have a clash of culture that cannot be denied. Too often as adults we tend to ignore the “languages” of our teen culture. They exist within this framework as a means of resolving intellectual challenges that the world breathes down on them so heavily. As a means to deal with all the challenges they face, they have learned to cope; define their own sphere of associations and within that conclave, create language- means of expression without adult overhaul or automatic defaults according to a grammar instruction in traditional language use. This is not to say there are not consequences for the rejection of one over the other but to communicate the reality of where they live.

Media sources have depicted Ms. Jeantel as an unlearned, unsophisticated, naïve young woman who is “above her grade” in tangling with a defense attorney with lots of schooling, experience, and verbal language to fend her off at all junctures; shooing her back to the witness box to complete a testimony until he determines its exit ramp that has actually already been predetermined.

Instead, the defense attorney is met with a feisty young woman unfamiliar with the formal decorum of people and places in politics and courtrooms. She is unacquainted with personality types and phrases to impress jurors, court reporters, a judge, and all others whose eyes are fixed on her. The real revelation as we move through the case is that there is a clash of culture between those who have and those who do not have as much.

When I hear and read commentaries that make fun of Ms. Jeantel’s so-called “verbal and personal awkwardness” in the witness stand with her “non-King’s” language and antagonistic body language, I shrink in who I am.  At some point, all of us are keepers of the next generation. We cannot point fingers at Ms. Jeantel and not observe the four extending in absolute certainty, back at us- this is without race, culture, ethnicity, economics, geography,  or political affiliation. Each of us as members of the human race must share in any awkwardness deemed inappropriate for a courtroom and a case with so much on the line.

What cannot be lost in translation is that Ms. Jeantel had to transition from a young girl riding bikes and watching video games just a year or so ago, to be a star witness in a case that has the entire nation watching. So much rides on her testimony and so much she says is not understood or has been misunderstood. Late night as I watched the rerun of the court proceedings; I could not help but feel the depth of her frustration. I was simply wishing, as she struggled to communicate “informally” in a “formal, adult, and legally binding place,” that someone could step forward and interpret her heart, her intentions and her pain BECAUSE they understood “her” language.

You see; Ms. Jeantel became Trayvon Martin’s voice by no will of her own, but purely by default. She hung out on a telephone call with him just long enough to be plunged into a world that she never knew. Nonetheless, Ms. Jeantel has now become Trayvon’s voice in a courtroom as a witness to what happened that tragic night.

As the trial continues, Ms. Jeantel leads the witness pool once more. To try and fit her testimony into a traditional template of cross examination is unfair. What is fair if truth is what one is after, is to seek understanding of a number of millennial behaviors that influence the way they respond to a host of situations, and then approach. I am hopeful as this case continues to unfold, what is learned is that kids have a language within their own circles that may not be understood by or seen as acceptable but it does not negate the fact that their worlds are theirs and interpreting the difference is where true justice can reign. No matter how frustrating it is to watch her testimony, it is what it is… she is Ms. Rachael Jeantel.