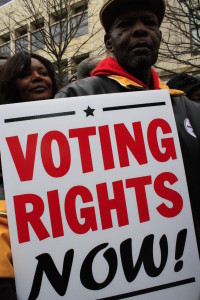 The State of the Union address was a time to to be reminded of why President Obama was elected. This extraordinary visionary is more committed to his promises than ever before. Prior to the State of the Union, President Obama, frustrated by Washington politics and gridlock, made the announcement that he would use the powers that he has to get as much done as possible with the use of Executive Orders. Not only that, he understands there are issues that will demand bipartisan support. Negotiating with the Republican party has been a difficult undertaking nonetheless, there is effortless belief that he will continue to work to build bridges across perspective and ideology, to get the jobs done.

Below is a USA Today article take on his address that lays out his initiatives to America and the reasons why:

I remember being safe in public places. I can remember browsing carefree in a world where kids and guns and crowds were never synonymous with pulling a trigger or the mad rush to escape fire.

And as I grew I can remember feeling perfectly safe walking with no hand in mine and no eyes peering stern-like, pushing me into safety from fear that I might be in harms way. There were no calls from campuses, no shelter in place, no emergency alert messaging -text, Twitter or, Facebook. It was just simply old -fashioned trust in people that the “good” ones were more prevalent than the “bad ones, and the bad ones only interrupted lives every now and then. Sadly enough, “every now and then” has been replaced with “again and again”. To say that death by fire arm is a new cultural norm that we all might as well get use to, is deeply troubling.

With recent events that took place today at a mall in Columbia Maryland, it causes all Americans to stop and consider what is really going on. Have we abandoned a civil society in exchange for rage, vendettas and uncommom causes like causing gun violence to become common.

It is not just the incident today that is troubling but the rapid escalation of violence in America with the events of the entire week. From shootings in South Carolina to Oklahoma, Purdue and Widener University.

Such tragedies in our nation over the last week  leaves all of us more concerned about public safety issues than ever before.  So what do we do? Do we lock our kids behind closed doors? Do we dare them to come out ever? Do they not get the right to explore the universe attending colleges and universities? Or do we keep them from learning and then earning wages that promote self sufficiency and boot strapping strategies with fear that they will be gunned down at a university or their workplaces. And what about us?  Do we do the same for ourselves?  Do we work and be mobile in a country in fear of our neighbor, our workplace, a casual passerby on the street or a day out for respite or amusement in a movie theater or dining at a cafe? And what if you can no longer disagree with another. Should there be concern that issues are no longer debatable because of the threat of immediate retribution? What’s going on? Is this not America?

It is as if the American “script” is no longer being read.  I say, it’s time for us to be reminded of what we learned long ago. Robert Fulghum has captured timeless principles of a civil society that has become more of an imperative now than ever before. Here is some of what he wrote:

“These are the things I learned (in Kindergarten):

1. Share everything.
2. Play fair.
3. Don’t hit people.
4. Put things back where you found them.
5. CLEAN UP YOUR OWN MESS.
6. Don’t take things that aren’t yours.
7. Say you’re SORRY when you HURT somebody.
8. Wash your hands before you eat.
9. Live a balanced life – learn some … sing and dance and play and work everyday some.
10. Take a nap every afternoon.
11. When you go out into the world, watch out for traffic, hold hands, and stick together.

― Robert Fulghum, All I Really Need to Know I Learned in Kindergarten

Young. Poor. Black. Single with child… now what? Does “uncle sugar” really show up to enslave the libido of all those young black girls having baby daddy’s baby out of wedlock? It is difficult to imagine how women within the demographics that Huckabee was describing would respond to what he had to say. It appears that once again the poor have been made punching bags for those who have the power to create narratives that are not grounded in sensitivity to issues that are defined by those unable to fight back.  Nor do the stories reflect the reality of being poor and black and single and with child.

Huckabee, former Republican candidate for president in 2008, speaking  at a recent Republican National Convention luncheon, conjures up a narrative featuring the government as uncle sugar and birth control being used by women as them being enslaved by another government subsidy as if they have not the ability to control their own desires. The only question left is what next?

From cuts to legislative intent to balance budgets on the backs of the poor by cutting and undermining efforts to help sustain these programs- from cuts to food stamps, income tax credits, long-term unemployment insurance and a rejection of Obamacare to now the uterus.

As reports of Huckabee’s remarks settle in the homes and smartphones of those his remarks were intended, I’m hopeful outrage over his comments will transform into something more than a momentary emotional response. Instead just maybe that “war on poverty” that was kicked off over 50 years ago will finally land in the bins of bipartisanism  without the grids that now divide us. Just maybe the nation will agree that poverty is a fierce interrogative that impacts even conversations about libido and uncle sugar and a woman’s right to decide and to protect babies born or not. And that whether her prescription for birth control is to prevent unplanned pregnancies or  a health condition made better by it,  this is a narrative better scripted in some place other than a narrative about an uncle sugar.

The war on poverty is a clash of ideologies that persist through debates and elections. Elected, political, fiscal and public will to continue the war has waned long ago. Partisanism is reframing the debate and reshaping the context of the war. In 1964, just a few weeks after the death of President John Kennedy, President Lyndon B. Johnson launched “an unconditional” war on poverty. He believed the real remedy was not to just end poverty but prevent it as well.

Today, we face a much different reality. There seems to be a lack of political will to “attack” poverty and prevent it from defining, as reported by the Huffington Post, over 50 million Americans. The urgency in the legislative acts of the  Johnson administration began a journey that continues to continue. How do we end poverty and then prevent it from reoccuring in the lives of over 50 million  Americans?

It is time for a nonpartisan approach to poverty that does not end with an administration but begins in the hearts and legislative acts of all elected officials.  There must be a dual approach to finding the best practice to save taxpayer hard earned money while at the same time, exercising diligence in meeting the needs of the most frail and least likely to make ends meet. Textless and baseless debates over whether or not to lend a hand to one who has fallen and struggles to get up, needs to rest within the context of an undeniable infallible truth written long ago.

Without debate there is a moral obligation to care for the poor. It has been a stalwart practice of mankind since his creation. So much so, that in Deuteronomy 15:11, inscribed into the pages and into the mandate for living, was a forewarning that  the poor would always be with us. The challenge it presents to all of us is how can those of us with bread deny him that has none. How can those of us who have been blessed with plenty not consider him that has very little or nothing.

It is said that if it is within our power to do good to another, we are to do just that. The good we can do also includes public policy matters that move beyond name calling and into legislative might that really makes an economic difference in the lives of those who need it now and in the future.

Nelson Mandela, leader, freedom fighter, global ambassador, elder statesman, father of a nation, transformer,  and past president, died leaving a legacy of uncompromisable love for peaceful resolves for himself, his nation and for those that will carry his legacy.

It has been said that history records April 27, 1994 as the beginning of beginnings. In 1990, upon the release of Dr. Mandela from prison, it only took four years to underscore the transformation South Africa and its people, would undergo that would in turn, change the nation forever.

For the first time in South African history citizens of all races were able to vote. Nelson Mandela,  after being incarcerated for 27 years,  was elected by an overwhelming majority, as South Africa’s first black president.

As we mourn the death of Nelson Mandela, we will always remember and never forget him as a stalwart leader, emancipator, peacemaker and diplomat! His resolve was to love his country in service to all of its citizens, as well as leave a lasting legacy for his beloved country.

On behalf of County Impact, we join the world in mourning the passing while celebrating the life and legacy of former president Nelson Mandela.