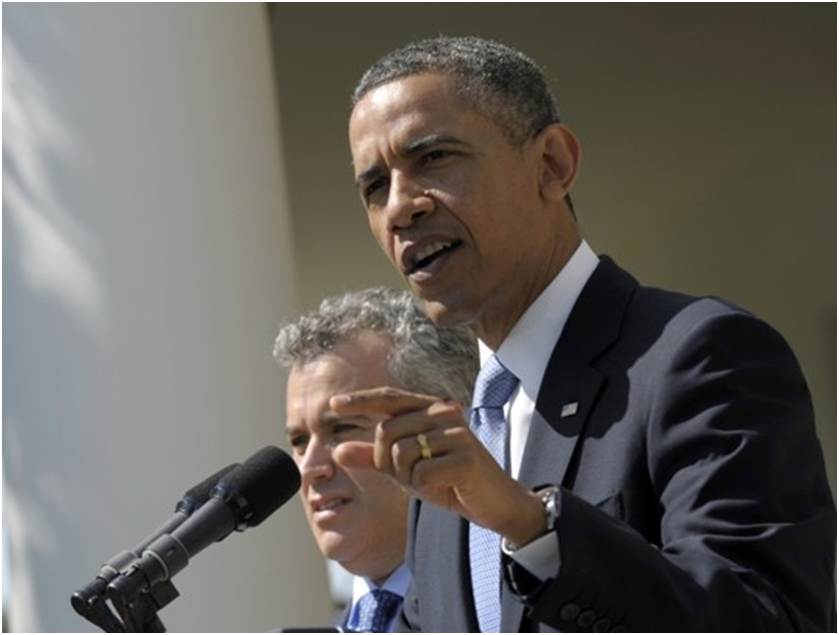 Today President Obama sent Congress his fiscal budget.  Below is  the text of his remarks given at the Rose Garden this morning. His budget will be vetted by a number of sources to determine if his strategy for long term reforms will grow the economy, create jobs and shrink its deficits; while at the same time, poise him to fulfill his promise to all Americans to include its most vulnerable.

Remarks by the President Announcing the Fiscal Year 2014 Budget

THE PRESIDENT:  Good morning, everybody.  Please, please have a seat.  Well, as President, my top priority is to do everything I can to reignite what I consider to be the true engine of the American economy:  a rising, thriving middle class.  That’s what I think about every day.  That’s the driving force behind every decision that I make.

And over the past three years, our businesses have created nearly 6.5 million new jobs.  But we know we can help them create more.  Corporate profits are at an all-time high.  But we have to get wages and incomes rising, as well.  Our deficits are falling at the fastest pace in years.  But we can do more to bring them down in a balanced and responsible way.

The point is, our economy is poised for progress — as long as Washington doesn’t get in the way.  Frankly, the American people deserve better than what we’ve been seeing:  a shortsighted, crisis-driven decision-making, like the reckless, across-the-board spending cuts that are already hurting a lot of communities out there — cuts that economists predict will cost us hundreds of thousands of jobs during the course of this year.

If we want to keep rebuilding our economy on a stronger, more stable foundation, then we’ve got to get smarter about our priorities as a nation.  And that’s what the budget I’m sending to Congress today represents — a fiscally responsible blueprint for middle-class jobs and growth.

For years, the debate in this town has raged between reducing our deficits at all costs, and making the investments necessary to grow our economy.  And this budget answers that argument, because we can do both.  We can grow our economy and shrink our deficits.  In fact, as we saw in the 1990s, nothing shrinks deficits faster than a growing economy.  That’s been my goal since I took office.  And that should be our goal going forward.

At a time when too many Americans are still looking for work, my budget begins by making targeted investments in areas that will create jobs right now, and prime our economy to keep generating good jobs down the road.  As I said in my State of the Union address, we should ask ourselves three questions every day:  How do we make America a magnet for new jobs?  How do we give our workers the skills they need to do those jobs?  And how do we make sure that hard work leads to a decent living?

To make America a magnet for good jobs, this budget invests in new manufacturing hubs to help turn regions left behind by globalization into global centers of high-tech jobs.  We’ll spark new American innovation and industry with cutting-edge research like the initiative I announced to map the human brain and cure disease.  We’ll continue our march towards energy independence and address the threat of climate change.  And our Rebuild America Partnership will attract private investment to put construction workers back on the job rebuilding our roads, our bridges and our schools, in turn attracting even more new business to communities across the country.

To help workers earn the skills they need to fill those jobs, we’ll work with states to make high-quality preschool available to every child in America.  And we’re going to pay for it by raising taxes on tobacco products that harm our young people.  It’s the right thing to do.  (Applause.)

We’ll reform our high schools and job training programs to equip more Americans with the skills they need to compete in the 21st century economy.  And we’ll help more middle-class families afford the rising cost of college.

To make sure hard work is rewarded, we’ll build new ladders of opportunity into the middle class for anybody who is willing to work hard to climb them.  So we’ll partner with 20 of our communities hit hardest by the recession to help them improve housing, and education, and business investment.  And we should make the minimum wage a wage you can live on — because no one who works full-time should have to raise his or her family in poverty.  (Applause.)

My budget also replaces the foolish across-the-board spending cuts that are already hurting our economy.  And I have to point out that many of the same members of Congress who supported deep cuts are now the ones complaining about them the loudest as they hit their own communities.  Of course, the people I feel for are the people who are directly feeling the pain of these cuts — the people who can least afford it.  They’re hurting military communities that have already sacrificed enough.  They’re hurting middle-class families.  There are children who have had to enter a lottery to determine which of them get to stay in their Head Start program with their friends.  There are seniors who depend on programs like Meals on Wheels so they can live independently, but who are seeing their services cut.

That’s what this so-called sequester means.  Some people may not have been impacted, but there are a lot of folks who are being increasingly impacted all across this country.  And that’s why my budget replaces these cuts with smarter ones, making long-term reforms, eliminating actual waste and programs we don’t need anymore.

So building new roads and bridges, educating our children from the youngest age, helping more families afford college, making sure that hard work pays.  These are things that should not be partisan.  They should not be controversial.  We need to make them happen.  My budget makes these investments to grow our economy and create jobs, and it does so without adding a dime to our deficits.

Now, on the topic of deficits, despite all the noise in Washington, here’s a clear and unassailable fact: our deficits are already falling.  Over the past two years, I’ve signed legislation that will reduce our deficits by more than $2.5 trillion — more than two-thirds of it through spending cuts and the rest through asking the wealthiest Americans to begin paying their fair share.

That doesn’t mean we don’t have more work to do.  But here’s how we finish the job.  My budget will reduce our deficits by nearly another $2 trillion, so that all told we will have surpassed the goal of $4 trillion in deficit reduction that independent economists believe we need to stabilize our finances.  But it does so in a balanced and responsible way, a way that most Americans prefer.

Both parties, for example, agree that the rising cost of caring for an aging generation is the single biggest driver of our long-term deficits.  And the truth is, for those like me who deeply believe in our social insurance programs, think it’s one of the core things that our government needs to do, if we want to keep Medicare working as well as it has, if we want to preserve the ironclad guarantee that Medicare represents, then we’re going to have to make some changes.  But they don’t have to be drastic ones.  And instead of making drastic ones later, what we should be doing is making some manageable ones now.

The reforms I’m proposing will strengthen Medicare for future generations without undermining that ironclad guarantee that Medicare represents.  We’ll reduce our government’s Medicare bills by finding new ways to reduce the cost of health care — not by shifting the costs to seniors or the poor or families with disabilities.  They are reforms that keep the promise we’ve made to our seniors:  basic security that is rock-solid and dependable, and there for you when you need it.  That’s what my budget represents.

My budget does also contain the compromise I offered Speaker Boehner at the end of last year, including reforms championed by Republican leaders in Congress.  And I don’t believe that all these ideas are optimal, but I’m willing to accept them as part of a compromise — if, and only if, they contain protections for the most vulnerable Americans.

But if we’re serious about deficit reduction, then these reforms have to go hand-in-hand with reforming our tax code to make it more simple and more fair, so that the wealthiest individuals and biggest corporations cannot keep taking advantage of loopholes and deductions that most Americans don’t get.  That’s the bottom line.

If you’re serious about deficit reduction, then there’s no excuse to keep these loopholes open.  They don’t serve an economic purpose.  They don’t grow our economy.  They don’t put people back to work.  All they do is to allow folks who are already well-off and well-connected game the system.  If anyone thinks I’ll finish the job of deficit reduction on the backs of middle-class families or through spending cuts alone that actually hurt our economy short-term, they should think again.

When it comes to deficit reduction, I’ve already met Republicans more than halfway.  So in the coming days and weeks, I hope that Republicans will come forward and demonstrate that they’re really as serious about the deficits and debt as they claim to be.
So growing our economy, creating jobs, shrinking our deficits.  Keeping our promise to the generation that made us great, but also investing in the next generation — the next generation that will make us even greater.  These are not conflicting goals.  We can do them in concert.  That’s what my budget does.  That’s why I’m so grateful for the great work that Jeff Zients and his team have done in shaping this budget.  The numbers work.  There’s not a lot of smoke and mirrors in here.

And if we can come together, have a serious, reasoned debate — not driven by politics — and come together around common sense and compromise, then I’m confident we will move this country forward and leave behind something better for our children.  That’s our task.

Thank you, God bless you.  God bless the United States of America.  (Applause.)