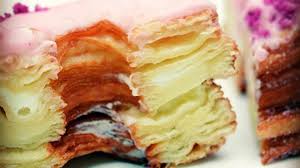 It’s only been a few weeks, and already Dominique Ansel has taken the world of pastry and its consumers by storm. Just a few weeks ago, the owner of a small French bakery in New York, Mr. Dominique Ansel wanted to make a different kind of staff snack. He decided to try crossing a donut with a croissant and so created a pastry he calls a Cronut.

Instantly, it became the most sought after and the most tweeted snack in New York, and then came the Internet; it was an overnight sensation with lines forming at 6:00 a.m. to get one of 200 Cronuts at $5.00. Not only that, their popularity has already spawned an online “black market,” market” and its demand has crossed the Atlantic.

Being thrown into the spotlight because of pure curiosity of your own ability to create and think out of the box is what has made a lot of people wealthy and America great. Greatness is all around the world. It saturates places that are least expected to produce world-class  inventories of everything from music, to electronics and even foods. Nike and Apple are not the only ones with lines developing as demand for their products soar.

Rural communities add to the bottom line of companies just as communities that flourish. Economic outcomes and the pathway to a flourishing bottom line are oftentimes misleading. Some would believe the key is access to great resources while others believe it is a combination of access, intuitiveness and action. Having to “make do”, is a more old-school  framework than present day. “Back in the day,” if you had a need, family, a neighbor or other community member, would help meet that need. Being creative was a norm. There were no ideals in the community. Stores, products, and services, within a rural context were never sufficient.

Times have changed and so has expectations to produce amazing things. What has not changed for a number of communities is poverty; it continues to be persistent, although the people, who live there, just might still exist as if time stood still. The curiosities of others have served them well. So is the case in a small bakery in New York City.

What continues to be a probing potential is the movement of skills from producing only what is expected to allowing ideas to flourish and experimentation to take place. Improving economics both personally and community-wide begins when a culture of “risk,” where ideas are welcomed, encouraged and supported, is a way of community life. Business think tanks are not just for larger places. They are the creation of the needs that exist and a commitment to the extent to which a community will go to make economic progress happen.

Mr. Ansel created an amazing and consumer demanding snack sort of by accident. He took instinct and married it with skill, and the Cronut was born. A culture of creativity and experimentation was already in the atmosphere. New York is such a place. Best practices of all sorts, in particular, in the arts and entertainment industry, live there. In communities of poverty where the inspiration of creativity is replaced by the need to survive, intentionality will have to take precedent. Such communities must inspire creativity in spite of its many needs.

Communities of poverty are resilient and more innovative as one might think. If given the support as an economic development strategy, one would be amazed at the “thinking” the poor can do. Poverty of “things” does not mean there is a poverty of “thinking.”