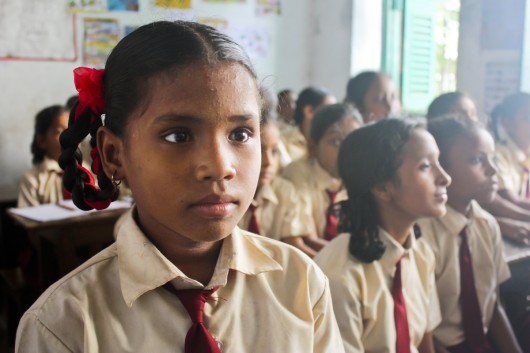 From the Olduvai Gorge in East Africa through to the middle passage, people of color are reminded of their journey from the motherland when watching a “human” documentary featuring the tragedies turned victories of nine girls from nine countries. The film focuses on nine girls fighting against horrific odds for human rights and for their right to learn. As the film moved the storyline along, each girl embraced a common theme. They wanted to learn and were willing to tackle tough issues and choices to make that happen. Miraculously along the way, an advocate would surface  from their own personal passions, to stand in solidarity with them.

As each girl walked you through memories of their bondage, a skilled writer captured their stories, penning it in rhythm with their accounts of what happened.  All of them found their recollections painful and difficult to recapture, preferring to sober the moment with laughter or the recounting of an artistic work that became their voice, or a piece of music that they wrote in corn bends or flower beds. Capturing such memories facilitates conversations that have been before now whispers across global economies. The world and its need to engage in the development of its people has never been a more impassioned desire for girls than now.

For sure, the world may turn a soap opera like construct, but not without girls… not without women; and not just women from a general context, but from the role of nurturer. How can a woman nurture her children, her daughter without her first being nurtured intellectually and inspired to exhaust her own gifts and talents?  Then what about her “voice,” her ability to think and reason and then stake a position that is uniquely her own and that position be respected.

There’s nothing more lovely than a reasoned position groomed from an inspired intellect and then cast into the arena of the world’s discourse. It is then she is what she has been called to be- distinctive in personhood; esteemed as a girl and proudly so, with no regret for her gender.

Girl issues are not just another world challenge, but an American challenge as well. Science and Math remain subject matter that girls perform the least favorably on. Issues of self-esteem are major such as feeling inadequate, unworthy and unattractive- in general feeling bad about themselves. Graduation rights continue to tumble and the number of girls in America who grow up in hungry and in poverty and see their dreams dashed.   Out of the 51 states, North Carolina ranks 13th with 27% of their girls dropping out and not graduating in America. It is reported that more than 1 and 4 students across the nation or 28%, never graduate. Dropout by race /ethnicity:

Advancing the rights of girls is a passion that drives the work of girlrising.  With the birth of every girl by a mother, is the birthing of a new opportunity to intervene in their global plight. Integrating the worth of girls in all the work of the world, defends the meticulous nature by which they operate,  believing they can be contributors worth protecting when in a broader sense, their lives are being marginalized by gender.

Below are links to articles on some of the challenges girls face- struggling not to drop out, to graduate and the report on its decline.

Internationally, there are a number of statistics that speak to the appalling conditions of girls, here’s one link with some featured statistics. To note, if a child bride marries at 5 or 12, she becomes a slave to an older man and the odds of her ever reaching an empowerment that includes an education, are too deafening. Therefore, understanding child bride statistics gives you a realistic view of her life and the need to stop child marriages to start girls learning.

THE WORLD’S WOMEN AND GIRLS DATASHEET 2011

·         Child brides are treated as PROPERTY – they are bought, sold and thrown away at the whims of their husbands.

1 IN 9 GIRLS are forced into marriage before her 15th birthday.