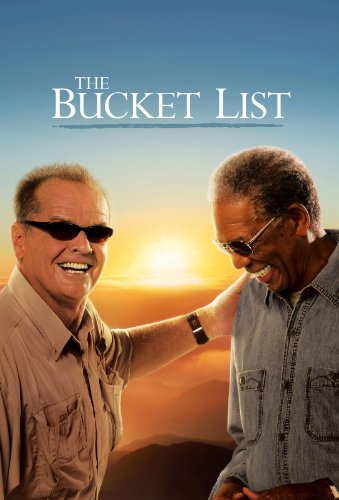 There are movies that impact us and then there are movies that inspire you to personal action. The Bucket List starring Morgan Freeman and Jack Nicholson is such a movie. Two men from two different ends of the economic ladder share a common challenge. They are both diagnosed with an incurable disease. Morgan Freeman’s character Carter Chambers and Nicholson’s character Edward Cole end up at the same hospital, and their relationship begins with Carter making a list of things he wished he could do with less than one year to live. In response to finding the list in the trash can, billionaire Nicholson agrees to fund the adventure by encouraging Freeman to do everything on the list and even more was added.

What was amazing about the challenge presented Freeman, is that all of us have bucket lists. We have been dreaming of  things such as: running  a marathon, feeding hungry children, getting out of debt, getting off of public supports, going back to school, paying of credit cards, volunteering in a soup kitchen, learning martial arts- another language- playing a musical instrument, traveling around the world, going rock climbing, going on a cruise- to the grand canyon, going island hopping, taking up photography, making a list of books to read- movies to see, going back to school, donating to charity, writing a book, donating blood to Red Cross, auditioning TV show, winning talent contest, creating YouTube video, starting a business, mentoring a kid, volunteering at a local school, visiting a zoo, going bird watching, owning a piece of land, buying a house, singing in a choir, starting a hobby, going to a professional sporting event, going to a parade, and learning to play piano, to name a few things. Of course a list can be as extravagant as you dream it. So dream it! Do it! A bucket list is meaningless unless you actually do something with it- coordinating check marks next to the task is how you measure the goal has been accomplished… act is complete and then on to the next.

The take away from the movie is a simple one. Now is the time to dust off all the things you have been thinking about doing, and do them. Creating your own real-life  bucket list will be the most important act you will ever do that has been meaning that last far beyond its finish.