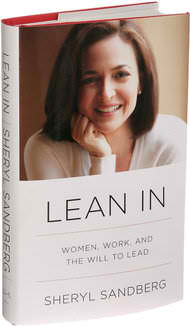 Whether women control 80% of household spending, or they control 73%, the point to be made is that women control an enormous amount of wealth. If you compare the amount of money, they control – alongside their controlling interest on board’s committees, and commissions, the room for parity are so overwhelming that you can fit decades. There are a number of conversations being had about an emerging perspective of women. Lean in: Women, Work, and the Will to Lead, a controversial book by Facebook COO Sheryl Sandberg’s has caused the issue of women, family, work and the glass ceiling to be revisited once again.

Sandberg talks about women and their mobility in the workplace and more specifically, in corporate America. Push back has come from a lot of sources to include women pointing out a culture of privilege that Sandberg grew up in and a privilege that is unrealistic for most women.The economic opportunities Sandberg had are a far cry from what is possible in communities of poverty, not to mention those living in persistent poverty. Albeit, her point is not to directly correlate her experience with all women; she does seek to challenge women to push through glass ceilings with a balance of family.

She does not “mentor up” of course, with women who have to struggle daily to make ends meet. Her life and the life of the poor are in deep contrast and even deeper still, the ability to relate. It is here in her book that she creates an offer for women to join her and “lean in” , by going to www.leanin.org.  Much of what she prescribes makes sense if you are not poor with limited resources and even more limited given little to no access to power and influence.  For this group of women, her book becomes a “shelvable”, anecdotal reading.

Women in poverty face economic drivers that are in direct correlation with the economies of the community in which she lives. Her career path is determined by the number of or the lack of opportunities available.  The availability of opportunities rest more so in policy than her inabilities. The failure to attract, grow and sustain businesses and create jobs, defines when or whether she moves out of poverty. Understood is that her educational attainment is a driver as well- but what if she has potential, skills and or an advanced degree? What then? It is because her community shows little sign of growth that she settles for educational matters “leaning back” instead of being inspired to “lean in.” For what, becomes the overwhelming pejorative? There is public policy at work that inevitably drives outcomes. In communities of poverty, executive mansions live “off campus.”

The facts are women, in poverty or not, aspire to add value to everything they do. Their fullest potential is achieved when they are treated as co-partners in the American declaration that all of us are as declared.  However, if she is poor and in poverty, no matter how much she tries to “lean in”, the politics leave her as a single performer; neither coupled by intention or possibility, but by more lack and much more fingers pointing fueled by a bureaucracy that frustrates.

Even still, there is a need, however, for women in poverty to claim their voice among all others. Theirs is a unique sound. It is a declaration of significance. Public policy that prescribes her value in terms of disgruntled supports by taxpayers, have wielded a prerogative inherited from its base of power and influence without truth that matters.

Sheryl Sandberg’s intentions are noteworthy. Challenging women to be more intentional in reaching higher levels of performance and leadership while balancing home and community life may have frustrated some, but it has also encouraged others. To lean in however, requires more than a woman’s commitment to leadership. There are issues of race, culture, geography, along with corporate and public policy that must also lean in.

Creating an environment where a woman’s desire to do and be, meets ample perspectives and policies that encourage the same, to lean in would be more innate than not. And with leveling the economic field, less poverty and more self-sufficiency, she can then see that life is not full of silos; it is a place of community, a habitation of possibility that is attainable if everyone leans in.