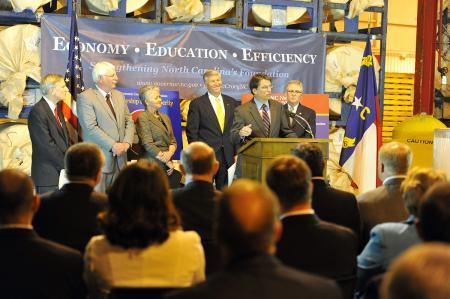 Northeastern North Carolina is not an easy part of the state or nation  to get a handle on and arms around the challenges it faces. With the recent announcement by Governor Pat McCrory to do economic development differently and do it within the context of a public private partnership must include rural and rural distressed community models. Regions like northeastern North Carolina want to move forward and not be looked upon as the “drag” on the state’s economy.  It does not want to be considered a  region of beggars and misfits as I’ve read, seen and heard such comments over a number of years. Governor McCrory, with the same zeal he used in announcing a “Partnership for Prosperity”,  the same commitment must be used to confront, address and acknowledge that rural distressed communities MUST be seen as partners in this process by creating a meaningful framework to host both poverty and prosperity.

One size does not fit all is an analogy that we are all too familiar with. Now must come the transformative nature of that belief. Rural communities that are distressed are in need of strategic options. Square pegs have never fit appropriately round holes… at least not naturally. Neither were they designed to fit.  Some economic engines are low hanging fruit; others require a deep dig that is mind bending and gut wrenching- so is the case of northeastern North Carolina. Its poverty has persisted and as persistent as is its poverty, must be policies that reflect no tolerance for further poverty in Northeastern North Carolina.

Nonprofits have always played a key role in distressed communities. When everyone else packs to go home, they remain faithful partners with limited resources. If the Governor’s wish is to move accountability to the private sector, decreasing the need for state appropriation of nonprofit dollars, is to  suggest he is either considering the many needs of the poor in his legislation or he has written off the poor as a casualty of elected office.

There is so much good nonprofits do that is beyond the capacity and ability of the private sector.  Rural communities in North Carolina and in particular those with a history of persistent poverty, welcomes the Governor’s vision to do economic development differently by constructing a bi-partisan team of its citizens to serve in partnership to create, expand and innovate the economy. It is a hope that such a journey will include all of North Carolina and not just those living in easy places where counting outcomes are done before the first dirt is turned, press conference is held  or final deal has been done.

Below, is the text of Governor McCrory’s announcement: