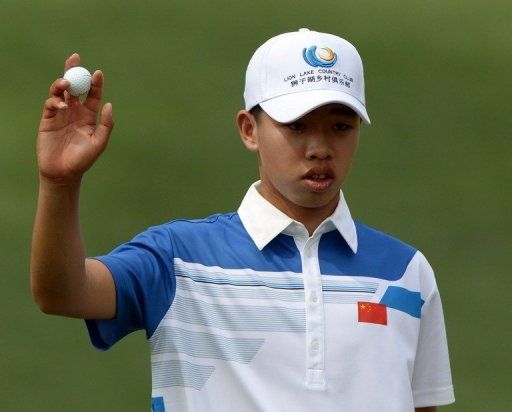 Just when everything around the world seems to be on edge with little sign of resolve, there comes a story that captures your attention that breaks rank with tension and uncertainty.   Tianlang Guan, from China, a fourteen-year-old  makes history at the Masters in Augusta, Georgia. He is the youngest player ever. But, he is not alone. There are young people, and even younger, breaking barriers with their intellect and causing adults to pay attention.

Tianlang proved over the past few days, that he is more than a teenager in love with a smart phone and his social network subscriptions. Imagine a fourteen year older competing alongside a Master great such as Tiger Woods. Who would have ever thought a kid so “inexperienced” would have what it takes to compete? Being a formidable contender so young takes tremendous talent, skill, giftedness, courage and discipline that is bigger than the zettabyte the NSA announced it used for cyber surveillance, along with a team of adults presenting with incredible resources that believe in the potential.

He is just one example of what happens when you invest in kids and align the right resources. Too often, demands are made on people groups and their communities with little or no means to make “the magic” happen or to establish a presence that  spells, “The X Factor.” There is only one way to determine what a kid is made of. Investments must be made early. You will need to assemble a team of believers; make sure they are intentional in their observation’s minus bias toward race, gender, ethnicity, geography and economics.

They must have an innate sense of discovery and a belief that genius and greatness can so-exist in communities of poverty as readily as in communities of wealth. They must also be willing to fight to expand support for early-childhood  education to include new best practices to meet the rigor of evaluation to back the cost of such public supports. Without such a commitment, the status quo is exaggerated and the belief that greatness and poverty do not co-exist, is exacerbated.

How will communities ever know the real greatness that it shelters when threats to early-childhood  education programs are made a reality, and no one bother to care enough to recognize the real casualty is a child’s inability to stretch its potential beyond its resources? Programs like Smart Start, Head Start and other community-based programs funded by public dollars for low-income kids are said to be a waste. Yet, the care given an inmate is applauded as long as he is off of the street.

The same zeal witnessed when a guilty verdict is reached must be the same enthusiasm generated when a child is refused aid to go to preschool or the university. Better a child grows to love literature and astrophysics, or how to recite at an open mic or produce a short film, than not.

Like Jacob Barnett, at the age of eight is said to be smarter than Albert Einstein. With an  IQ of 170- started his freshman year of college at age eight and now at  thirteen is said to be in line for the Nobel Peace Prize.  Instead of texting or  hanging out in cyber chat rooms, he is a student at Indiana University-Purdue University Indianapolis studying advanced astrophysics, hoping to expand Einstein’s theory of relativity and challenge the Big-Bang theory.

And then there is three year old Saflon Pledger with an IQ of 140 waiting to be accepted into MENSA, an organization for the most intellectually brilliant. What if she lived in northeastern, North Carolina? Would her brilliance have been recognized? Would it be looked for? Or a Colin Colston. Picture a toddler on the floor teaching himself to read well enough that he in a few short years, at age nine accumulated enough college credits to graduate at eleven from Stanford University Online High School.

Kids have unmeasured ability when living in communities with so many needs. Every odd seems to be aligned against them. Opponents fail to see the value of poor children. The investment is seemed to be wasted. Of course, not every child is a prodigy but EVERY child can be a history maker- the first in their family to graduate high school, attend college, no juvenile crime record, drug free, and no teen pregnancy.  As history makers they are as much a valued member of a community as a prodigy is to the world.  Their commitment to build a better life and live it to its full is possible. It is their unique gifts, skills and talent that creates the synergy  to keep everything running.  When they are absent from the mix it is noticeable. With them missing, a community ages. When a community ages without its aspiring minds – the vigor and innovation of a clever intellect and youthful inspiration, given all things a renewed sense of hope, is lost.

The lists of child prodigies are not just limited to Tianlang. He is in our present space reminding us that young people are extraordinarily gifted; excelling in amazing ways.  His success is a reminder that every child should be given the consideration of potential and possibility. However, such access is not synthesized by imagination or consideration, but by an intentionally meticulous commitment to a set of beliefs about all people.

It takes a considerable number of resources that are literally poured into a community or a person early on, to get the return on the investment such as is the case with Tianlang, a Tiger Wood or any other in sports and other disciplines. Simply stated, it takes more than zeal and ability; it takes hard cash atop a number of resources that are not cheap, to make the miracle of the amazing happen in the lives of the expected and the unexpected… there are no exemptions.