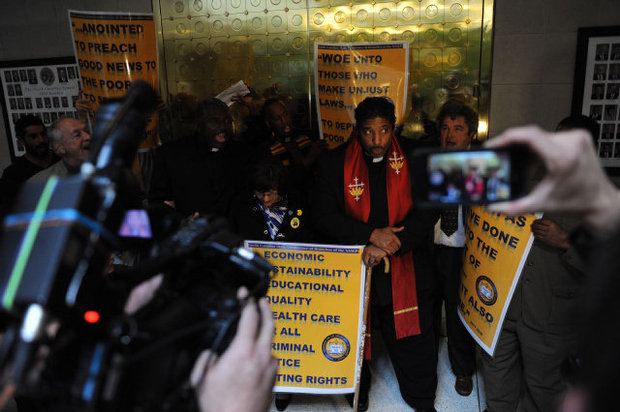 Growing concern over shifts in public policy that directly impacts the poor is causing unrest by some of the nation’s most stalwart advocates for the poor. Mounting hardships are driving a call to respond to legislation aimed at some of the state’s most vulnerable.

On Monday at the General Assembly in Raleigh, NC, the President of the NC NAACP, Dr. William Barber, along with other supporters took to the state’s General Assembly in protest of legislation positioned to harm rather than help, the state’s most vulnerable citizens. News outlets from across the country reported the conflict between the newly elected Governor, Pat McCroy, and a republican controlled state house and Senate with Dr. William Barber and others.

At issue were a number of striking concerns that have been raised publicly over a number of mediums to include a Voter ID bill that passed the House a week ago. Public hearings on the matter drew the attention of a broad coalition of state residents opposing the bill. In defense of such a position was the numbers. North Carolina reportedly, has never had a voter fraud problem and thereby, the legislation failed to provide reasons for its introduction and fast tracked through the General Assembly and on the ground as law. Those in opposition questioned not only the merits of the bill but the context by which it lays the foundation to build upon other intentions that further erode the rights of voters in the state.

The NC Voter ID Bill does not wholly represent the real intent of the effort to sign it as law. It lays the foundation for the erosion of a voter block that has been inspired by recent national elections. Our youngest members of this democracy echo the Voting Rights Act of 1965.  The 15th amendment has given them and all citizens without prejudice of race, color, ethnicity, economics, political preference or other, rights to this democracy by casting their vote. In exercising their legal right to vote, they cast their resolve at the voting booth.

Then there is the overwhelming belief that its intent- the voter ID bill, does not end with young voters, but with churches as well. Such consideration to stop Sunday voting and close early voting poles a week early, is an offense in any language and brings with it a precedent that is monumental in defining the real intent of bills around voting, elections and representation. It imposes the will of the powerful over that of the people and mismanages the confidence given it to act on the best interest of all being served in the state of North Carolina.

And then there is the state’s refusal to expand Medicaid with aims at rejecting Obamacare and the Affordable Care Act, as well as the state rejection of emergency unemployment benefits. North Carolina became the first state in the nation to do such a thing- when the economy, sluggish, trying to be rebound, and families are doing similarly. Understood there is a burdening of fiscal issues that drive legislation, but there is also a human issue that must steer decision-making as well.

The adage all politics are local, has never been truer. There is an inability to make broad sweeping changes one after the other without whole communities losing their balance and faltering under the weight of such decisions without first examining the human cost. What will the fallout be? How can they be mitigated?

Shouldering the weight of the state’s decisions is not those who cast for yeas but those who live in large and small places and in particular, those that live in rural distressed places.  The less money families have, the less they have to buy groceries and other things that meet human needs. Survival cannot host potential when it struggles to make eating needs meet.  It is mind-boggling to consider the impact of legislation that tackles human issues with ease of craft, and passage with the strike of a pen, dismantling the confidence that was hoped to have ripened over the years.

The rush to substantiate position, with power, has enabled a state culture that appears to be unbridled in its plight to consider the fiscal nature of the work and not the human face when decision-making. Legislative reasoning has to be brought back to the table. Opposing policies that harm more than do good is the work that is charged by writings deeply rooted in the tenets of the very democracy in which is said to be the driving force behind the acts being protested.

History has defined this moment. Rich in the archives of history are moments such as these that have always given voice to the silent acts of powerful people.  When legislation impedes the rights of a represented constituency, it is not enough to sit back and watch communities already teetering, historically, from abject poverty, continue to suffer from laws that bind them to their poverty and not bring relief from it.

There must be a pause in the work, giving everyone an opportunity to catch their breath, and then with a calm that permeates reasoning, sit down at a place called consideration to bring new levels of reasoning to a table that has grown barren from perspectives that sharply differ.