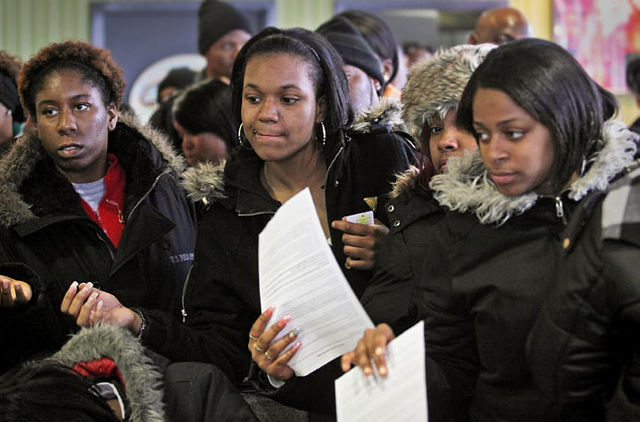 The stories are not new. They have gained in momentum over the past several months, but they are the same. The voices have become more vocal and less ashamed. No matter how the disclaimer’s ticker across screens, poverty is real and the fall out is even more real if there is not the resolve needed to find a cure. No matter, how much we want it to go away, wish it away, or even scoffing at it, with hopes it goes away, budget cuts and tough legislative language and acts will not make poverty go away.

Poverty has conditions of complexity that will never be resolved by abrupt and or “force-filled” legislation.  There must be a “master” plan to attack the root cause of poverty and a commitment to work the plan. Absent a well contrived strategy to end poverty, cutting aid does not end poverty. Instead, it exacerbates, and complicates matters in particular in communities of persistent poverty.

Embedded in the nature of poverty is a particular personal and familial culture that extends into the community that sustains it. It is therefore not enough to say “get out of poverty”; this will require legislative acts and appropriation of specific resources, crafted, and deployed intentionally, to cause such a movement.

Of course what is understood is that no one likes poverty and in particular, taxpayers who pay the bill. However, the simplicity of capturing poverty under such a simplistic lens, lends levels of frustration to a matter that needs more mental and spiritual rigor.  If it was that simple- cutting provisions from the farm bill that houses food stamps, and summer feeding programs or reducing support for single moms or rejecting emergency unemployment benefits or cutting Medicaid- if the answers were this simple, poverty for sure, could have been eradicated eons ago.

As much as poverty is a condition of needs not being met and the blame being cast on those under the force of poverty, it is a “culture” of existence where hopelessness, despair, and a way of life is played out in a way that is seen as counter cultural. In poverty though, it is called survival. In Les Miserable, Jean Valjean was sentenced to 19 years in prison for stealing a loaf of bread; food to feed his sister’s starving children.  He saw this as the only way to survive another day in the wretched life he, and his family was living. It was not that he was a “bad” person, in fact, the Broadway musical now motion picture unravels his journey as an escaped convict to a wealthier, philanthropic gentleman determined to escape the “prison” of poverty as well.

The true potential of a man or woman can never be judged within the context of their poverty- life happens- and with this reality, the complexion of survival is all too familiar- laziness, haphazard living, reckless decision making and dependence on public supports. To survive in poverty takes a particular courage and set of skills that tear at the very integrity of who you are.  Food, shelter, clothing and hope are essential life needs that cannot be subordinated. You have to have them and in the case of poverty, public supports become the catch net that has thrown them into disparaging political debates with little appetite for understanding what poverty really is.

What is needed is intention; a decision to purposefully attack poverty at its root and provide a plan of action that makes sense at the grassroots level.  There is enough known about poverty in academic and research journals that if aligned, would circle the globe countless times. Taking this information and doing the hard work of “planning out of poverty” the millions of men and women that live there, is where the answer lies. It is no longer good enough to keep saying how lazy and irresponsible the poor are- let’s just get in the game and call some shots that move, along a continuum of successes. Yes. It will require an “investment” of real capital. You cannot demand poverty to leave without investing in knowledge. Education is the key and all of its component parts. You can’t provide scholarships without considering baby sitters and transportation and fuel for cars- the complexity of a single strategy is mind boggling in poverty but an everyday innate action for those who live outside of this condition.

Poverty leads with voicelessness. It has no way to communicate what it feels, and it be heard. The louder voices drown out any say, poverty might have. If the powerful and the mighty decide to cut aid to the poor before unveiling the larger plan to help move them out of poverty, well, then, actions taken will simply be a cursory response to a condition in need of a cure.