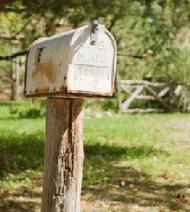 As a little girl raised by two amazing grandparents with a 4th and 7th grade education respectfully, and later by an incredible teen mom, I can still see my grandmother “fetching” the mail. For her, it was a daily ritual that would dare not be broken. No matter where we were or what we were doing, we had to be home in time to “meet the mailman”.

Hands folded all so carefully behind her back; there was a swaying type movement that gave rhythm to her walk.  She would scratch alongside the ditch bank or in the yard with a stick, she’d cleared from a tree; all around mail time. You could hear the trembling in her voice as she hummed a song she had sung in church the Sunday before. It was an old song alongside an old dusty rural road where her daddy owned a piece of land. She cleared it with her bare hands she would say.

As her wait for the mail moment lengthened, her hums to glory were crowded out by mumbling of “where is that doggone mailman?” Her tones sounded unintentionally edgy with a twist of concern. She was and had always been a feisty little plump farm girl and on this occasion, she did not change. Finally, there were shouts of “here comes the mail man”! Rarely would she approach the car and strike up a conversation; this was a duty my grandfather would undertake. As close to being cordial she would get, was a hand as a wave in the air mixed with unpleasntries, while murmuring complaints about his tardiness under her breath. She wanted nothing more to do with him than that.

With a stick in one hand, she would sashay across the road; looking both ways of course, before she crossed. This was her golden rule for crossing the street to the mailbox; I grew to love and would later do religiously and so my kids as well. The closer she got to the mailbox, the more obvious her anticipation. Her eyes would fill-full with curiosity-what did I get today or did it come today?  You see my mother was a teen mom. She went up north to find work, so she could come back to get her kids. Letters to my grandma were important. She sent money too. It was hard-earned money. But to my grandma and grandpa, it didn’t matter whether there were bill notes, love notes or money from my mom, it made them feel human… alive. They  were just very, very happy to get mail.

Then, there was my grandfather. How different his approach was to the same daily moment. He would be outside in the field or in the yard trimming flowers or weeding the garden and when he’d looked up, it seemed, there was the mailman coming down the road. For some reason the mail moment did not hold the same meaning as it did for my grandma. He was more enraptured by a “fellowship” moment, with the mail carrier. His eyes would light up and then came the biggest ole smile and a “hey there”, that you could ever imagine.

There was something striking about the opportunity. It seemed to transform a simple mail delivery into the most amazing conference on race relations ever, at that time. Back then of course, race was a really BIG issue. But to see my grandfather in fellowship, you would have never known.  High laughter at the roadside with the mailman was something to witness. After a few minutes of laughter and shooting the breeze,  he would hand my grandpa the mail, and they would bid each other a good day until the next mail moment.

Then, there was my personal recollection.  As a student of the “mail moment, the time finally came when I could “go get the mail.”  “Look both ways before you cross the road!” were shouts about as my grandma or grandpa watched over me. I’d been taught the art of watching, waiting, crossing, and then getting the mail out of the box and safely back in the ready hands of my grandparents who were watching. As time continued, there was no need to watch over me. I’d mastered the mail moment. No conversations with strangers. Just grab the mail. Look both ways before recrossing and don’t stop running until it was delivered safely into the hands of my grandma.

Today my mail moments are quite different. I email and text. I have a FaceBook page, YouTube Channel, subscribe to Linkedin and I Tweet- wow! My grandfather passed several years ago. My grandmother is 98 years young. Her memory is not what it used to be.  At times, I think about what my grandparents would say about the change in mail moments that use to be with skeptic anticipation for grandma and with the hope of fellowship by my grandfather, on the side of old dusty rural roads.