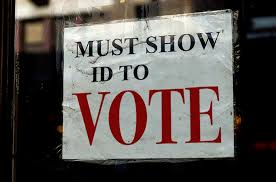 In just a few days the NC Republican party will hold hearings on their proposed Voter ID legislation. This fiery debate has stirred the memory of people of color in a painful way.  It mirrors racial constructs from North Carolina’s past that was thought, to be gone forever. Yet, news reports state that African Americans, poor whites, and aging persons would be impacted the most.

Terms such as disenfranchised, poll taxes, grandfather clauses, and the like, have resurfaced. The proposed Voter ID legislation, from its introduction, sounds simplistic, but in actuality has layers of complexity. The implications are much more far-reaching than the authors of the legislation in the House is willing to commit to.

In northeastern NC, there is an unsettling calm.  It’s as if the debate is just a crazy nightmare and at any moment, there will be a wake-up call. Getting your mind around the historic significance of challenging voter rights in the twenty-first century is enough to turn intellect into a tailspin. Theoretically, such an argument can be thrown in troughs of “what ifs”.  Even so, for this debate to be for real… for real, it unravels community confidence in all legislative acts created to protect the good that all people hold as a sacred trust in a democracy that purports its best strength is in its diversity.

Contrasting the Voter ID to Jim Crow days has filled blogospheres, and social networks across a broad constituency giving distressed communities no opportunity to catch its breath. From SB4 to a refusal to expand health coverage, to now be challenging voting rights, is an unfair fight. The state is facing incredible budgetary challenges and legislative actions that strike at the heart of the quality of life of the poor in the state. Attention to such details such as building needed infrastructure for attracting and retaining businesses, bringing relief to counties with abject poverty,  identifying low wealth-building  strategies to get people working and finally solving the poverty conundrum is what’s really needed. Discouraging voters when historic numbers of people of color are starting to vote, is just unfair.

This legislative move reflects past indiscretions that although reels like a nightmare, are happening in real time to real people- people of color, poor whites, and aged persons.  It is not in the best or highest interest of this Republic to challenge common everyday people who have not the means or wherewithal to challenge those challenging them. The most impacted are least able to have their voices of opposition resonate in the halls of Raleigh.

County Impact opposes this legislation. If statistical narratives are true, only about 1% of votes cast were prosecuted as fraud. Creating a state community of trust in the electoral process begins with addressing voter issues that are an authentic threat to the integrity of this democracy. It pains people of color to have to revisit proof of their legitimacy in the election process and then undergo the painstaking steps to attest to their right to vote.